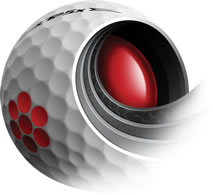 New for 2021 the Taylormade TP5x. The one ball that is better for all. There is a reason the TP5x is the most complete Tour ball and the choice of Rory Mcilroy, as it is built like no other.

The only 5 layered tour golf ball. It delivers unmatched performance from the tee, off the fairway or around the green. The TP5x delivers which ever shot is thrown at you on the course.

Taylormade TP5x is the fastest, longest tour ball they produce. Featuring 5 layer design, 4 of which have increasing levels of stiffness enclosed in a cast urethane cover. All this delivers unmatched distance off the Tee and approach shots without sacrificing feel on the scoring shots.

New for 2021 a Tour Flight Dimple pattern unlocks the next level of aerodynamics. Whilst still promoting max carry distances and a steep angle of descent for stopping power, especially with the long irons into the green.

Without losing any of formula that makes the TP5x a leader in speed and distance, Taylormade have added a softer urethane cover for increased groove interaction around the green for more spin and improved feel.

The Path to Distance

The path to distance has evolved with the all new TP5x. 2017 a brand new movement began with the optimal launch and spin conditions provided by our 5 layer construction. Then with the introduction of the HFM speed layer ball speeds were increased, now they have added advanced aerodynamics with the new tour flight dimple pattern.